Nerf bars and running boards are essential for those who want a safe area to step onto while exiting or entering a pick-up truck. Both running boards and nerf bars attach to the lower portion of the truck and as such, can be made in different shapes, forms, and material. Despite being so similar, these two have some distinct difference which we’ll talk about in this article.

Essentially, running boards will provide a stepping pad that will take up the space of the entire board length. Similarly to that, nerf boards give you a stepping surface on the entry points of your truck but can also extend from wheel to wheel. Now, if you’re interested in details, we suggest you grab a cup of coffee, sit back, and relax. This is an in-depth article about Nerf bars vs. Running boards, covering all you need to know about differences between them. 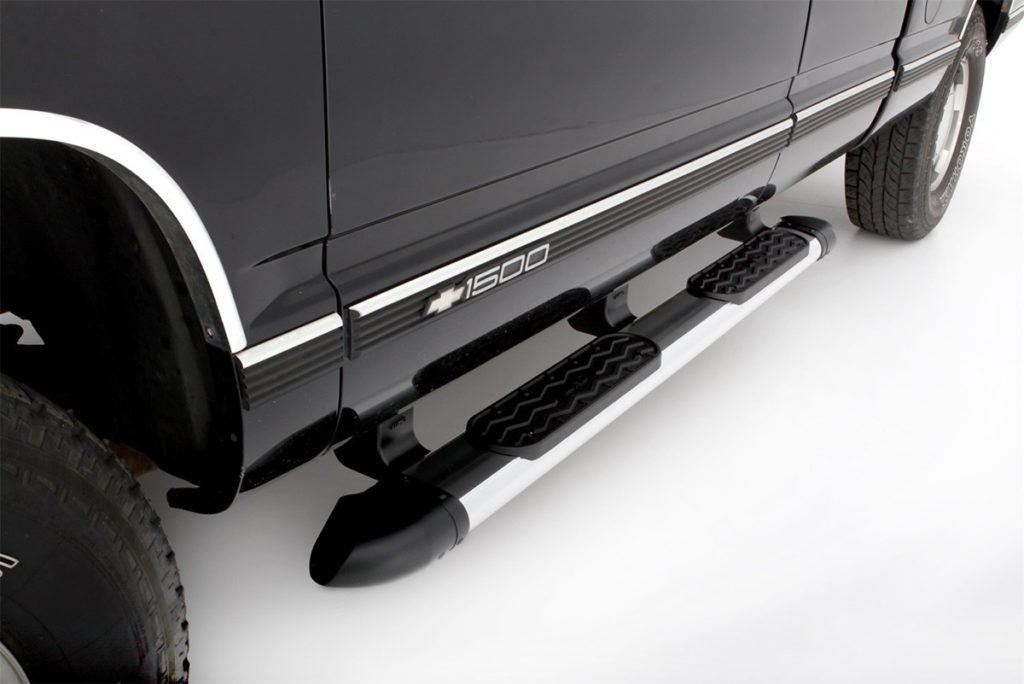 What are Running Boards?

Running boards will offer you more than sufficient space for entering your truck. As such, they often come with non-slip step pads, which will ensure that you stand firmly with one leg. Furthermore, running boards are made to endure extreme conditions and as such, they’re made slip-resistant in snow, rain, and other extreme environmental conditions.

Pros and Cons of Running Boards

The great thing about running boards is that they are tailored toward shorter passengers. They include a step-up, which makes it easier to get inside lifted vehicles, such as big transport trucks. As they cover up the entire board length, they are useful not only for getting in and out of the vehicle but also for wiping of dirt off your shoes before entering.

This is great if you’ve walked across dirty, wet, and muddy terrain before entering the truck. Thanks to the durable materials (plastic, fiberglass, aluminum, and steel), running boards can sustain all kinds of stresses and still keep that elegant, sleek look.

As for the cons, let’s point out the obvious ones – dirtiness. Having in mind that you use running boards for the purposes mentioned above, they can get pretty dirty in a matter of day or two. This can result in your car looking dirtier and less elegant, although this dirt can’t get inside of your truck. Another con is that the ground clearance of your vehicle is reduced, especially if you live in a place with high sidewalks and you need to drive over them.

What are Electric Running Boards?

Thanks to the ability to retract in a matter of one or two seconds, the electric running board is equally as efficient as the ordinary one. However, since this is a newer technology, it costs a bit more. This isn’t necessarily a con, as some truck owners value this advantage, as well as a stock look that your car has, which is more than enough for some to pay more money.

What are Nerf Bars?

Nerf bars have a bit different history and use from the running boards. They came straight from the high-speed racing, where nerf bars were used to keep off the aggressive racers at early days of racing. Because of that, nerf bars were and are used as protection. In the aforementioned case, nerf bars were protecting a particular racer from other aggressive racers, whereas now, they protect your truck from rock chips and road debris while driving.

Pros and Cons of Nerf Bars

Much like running boards, they also have the same function – allowing you to get in or out of the truck and wiping off dirt from your shoes. Unlike running boards, which come in a bigger plethora of materials, nerf bars are made of either steel or aluminum and can hold a maximum of 500lbs.

In some cases, nerf bars will feature foot grips at each door of your vehicle, providing non-slipping characteristics that are great for harsh conditions. However, cheaper nerf bars don’t have this feature. Some of them will be almost like running boards, running through the entire length of your truck. Finally, there are oval and round nerf bars, of which oval are more secure.

As much as they’re great at protecting your vehicles from debris, stones, and grime while driving, the downside is that they can become very slippery in extreme conditions – dewy, wet or cold. In this case, you’ll need to wipe the nerf bars before stepping on them, which isn’t the case with running boards.

Nerf bars can be universal, given the fact that there are several types of them – sports bars, bed-access, and wheel-to-wheel nerf bars. Sports bars are great if you want your bars to stretch for an entire length of our cab. Bed-access nerf bars are great for big trucks with a bed. Aside from being full-length, they also have a support step, necessary for easier access to the bed. Finally, wheel-to-wheel nerf bars are for pick-up trucks and as the name implies, they run from the front to the rear wheel.

When it comes to the size, nerf bars are divided into shapes and not the sizes in numbers. There are tube, oval, and hooped nerf bars. For example, tube bars come in 3 and 4-inch tubes, while oval nerf bars come in 4, 5, and 6-inch tubes. Hooped bars come with steps cropped out below them in a u-shape. The sizes of hoop bars aren’t in inches but in steps – one, two or three-step sizes are the most common.

Now that you know what running boards and nerf bars are, it’s time to point out the differences. Let’s first see what’s the same for both. The same is that both help you get in and out of the vehicle more easily, as well as give the possibility to wipe the passenger’s shoes before getting in. From the aesthetics standpoint, both will make your truck appear closer to the ground, adding a streamlined look to it.

The difference between those two is in the style. If you’re buying it strictly for functionality, then a running board might be a better choice. On the contrary, a nerf bar is a bit more subtle and allows you to achieve almost the same functionality, with less visibility. The slip-resistant characteristics are more or less the same, with running boards being a tad better.

Running boards come in different materials, whereas nerf bars have only two variants, so it’s all about the material and the finish you prefer. As we said, differences are subtle in almost everything except the style.

So, which one is better? This is the question you’re probably going to ask and the answer is – no one! Why? Because they serve the same purpose. One nerf bar might be better than a particular running board and vice versa. Now that you know everything there is to know about Nerf bars vs. Running boards, think before you buy either one of them, be sure to take a good look and see what fits your car the best, from both practical and looks standpoint.

Trucks|Comments Off on Nerf Bars vs. Running Boards, Pros, Cons, and Differences